Top Posts
9 Questions that Help Students Analyze Diversity in...
6 Reading Routines Every Classroom Needs!
Creative Reflection Technique: Everyone Wins When Students Map...
Meaningful Ways to End the School Year
10 Simple Ways to Engage Quiet Students
How to Use Reading Sprints for Motivation and...
How to Cite Quotations in MLA Format: Teaching...
5 Simple Routines to Ease into a New...
What is Meaningful Homework?
How to Engage Students with Musical Debates
Home Teacher Tips How to Write a Letter of Recommendation for Students
Teacher Tips

How to Write a Letter of Recommendation for Students

Are you wondering how to write a recommendation letter for students? Perhaps you’ve written one in the past, but it’s been awhile, or maybe you’ve never composed a recommendation letter, but you have an idea that you just want to verify. Keep reading for some quick tips to help make your letter-writing experience more efficient and genuine.

Welcome to “This or That,” a monthly chat where the authors of Reading and Writing Haven and Language Arts Classroom cover different ways of approaching common decisions in the ELA classroom.

Nothing’s worse than having a student come ask you for a letter of recommendation two days before he or she needs it. In the past, I’ve played the sentimental, caring teacher who subjects herself to an extra-long night of work just to make sure I get that letter done. Admirable? No. I shouldn’t do that, and neither should anyone else. As a young teacher, I wasn’t expecting this issue; therefore, I didn’t have any policies in place. Make sure you are clear with students regarding:

PREPARING TO WRITE A LETTER OF RECOMMENDATION

When preparing to draft your letter, speak the truth.

People who read letters of recommendation generally have read thousands of them. Just like an English teacher who can detect plagiarism without a software system, admissions workers or prospective employers can detect “copy and paste” letters in a heartbeat. If you commit to writing a student a letter of recommendation, write one from the heart, but don’t over-exaggerate the facts:

Remember that the letter reflects back on you.

If you feel you can’t recommend a student in good conscience, the best course of action is to tell them to find someone else. In all of my years of teaching, I’ve only had to do this a few times. Is it awkward? Absolutely – for me, anyway. Still, when you write a letter of recommendation, it ultimately is a testimony to your discernment abilities.

Give students a break.

It can be easy to judge a student’s character based upon one bad decision. For instance, I had a student who plagiarized a poem in one of my classes. He denied it until I finally chased him far enough down the rabbit hole that he had to admit the truth. Could I have judged him and refused to write him a college recommendation letter? Sure, but every student deserves a second chance. This student was sorry, and he had learned from the mistake. I was able to write his letter of recommendation because I was able to see that the mistake was actually a character-building event in his life. No one is perfect.

If you plan to say that Leon has leadership skills, make sure to provide specific examples of his ability to lead in the classroom, on the court or field, or in whatever context you know him. Is Taylor creative? How so? Does Randy set a high standard for the class? Talk about the time he gave everyone a pep talk about being respectful and having a good attitude despite the new policies your school had recently adopted.

Write about a student’s potential.

If you’ve been asked to write a recommendation letter for a student who doesn’t always meet class expectations, write about how that student has grown and the efforts he or she is making to improve. 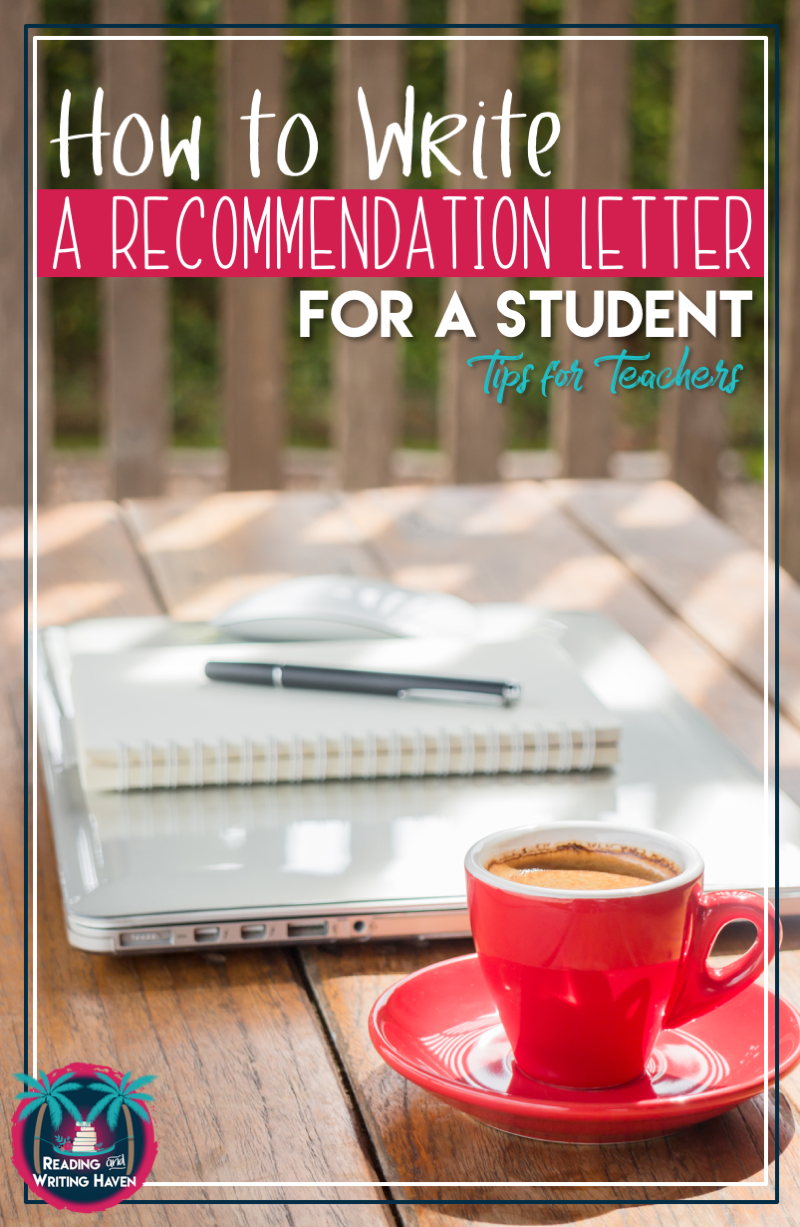 Of course, every letter of recommendation should have an opening salutation. I generally begin my letters with “Dear Admissions Committee” or someone’s specific name if the student supplies that information. The first paragraph, then, is when I establish my connection with the student.

The second paragraph is where I like to write about the student’s specific qualifications for the position, club, or college. Bringing in specific examples makes the recommendation more genuine.

The last paragraph of the letter is your opportunity to summarize why you are recommending the student and to provide your contact information.

Of course, close with “Sincerely,” “My Best,” or something equally formal and polite. Follow with your name and title.

I never copy and paste an entire letter of recommendation and then replace students’ names; it’s not fair to the student. However, I do use the same general template every time I compose a recommendation. Spend some time brainstorming and reflecting as you write your heart-felt letters for the students who admire you enough to ask you to recommend them for the next step in their bright futures.

Lauralee from Language Arts Classroom has shared her thoughts about writing a letter of recommendation for students in a sister post. Hop on over to her blog to read more about how you can make the recommendation letter meaningful for the student and efficient for the teacher (that’s you).

How to Motivate Struggling Readers

5 Simple Routines to Ease into a New...

What is Meaningful Homework?

How to Create Classroom Norms with Students

3 Digital Skills to Model in the Secondary...

How to Avoid Teacher Burnout with Distance Learning

How to Make the Most of eLearning Days

Meaningful Ways to End the School...

5 Simple Routines to Ease into...